Macroalgae as carbon source for PHA

Polymer derived from microorganisms that feed on seaweed 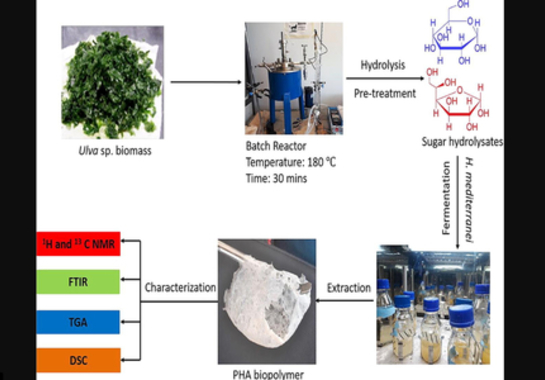 The team at Tel Aviv University is working on producing a bioplastic from marine microorganisms that completely recycle into organic waste.

Bioplastics are plastics manufactured from biomass sources instead of fossil fuels. Many degrade far more quickly than traditional plastics, but creating them typically requires fertile soil and fresh water, which aren’t available everywhere.

Now, the researchers have found a way to create a bioplastic using seaweed, a far more accessible resource. The researchers are using a promising new approach that could both reduce strain on the plastic-clogged oceans and reduce the Earth’s dependence on fossil fuels.

The researchers harnessed microorganisms that feed on seaweed to produce a bioplastic polymer called polyhydroxyalkanoate (PHA). "Our raw material was multicellular seaweed, cultivated in the sea," Dr. Golberg says. "These algae were eaten by single-celled microorganisms, which also grow in very salty water and produce a polymer that can be used to make bioplastic".

They are now conducting research to find the best bacteria and algae that would be most suitable for producing polymers for bioplastics with different properties. Their process will enable countries with a shortage of freshwater, such as Israel, China and India, to switch from petroleum-derived plastics to bio-degradable plastics.

The research is partially funded by the TAU-Triangle Regional R&D Center in Kfar Kara under the academic auspices of Tel Aviv University, and by the Israeli Ministry of Energy and Infrastructures.

Researcher at TAU's Porter School of Environmental and Earth Sciences

Professor at TAU's School of Chemistry

Bioplastics and Fibreboard from Seaweed